Do you prefer candles with real flames or (battery operated) faux lit candles? Either way, they illuminate light and create ambiance for our spaces. Light dispels darkness and changes the way we see our surroundings.

Jesus announced at the Festival of Lights or Dedication (see John 8-10) “I am the light of the world. Whoever follows me will not walk in darkness, but will have the light of life.”[1]

Then, He graciously offered light to a blind man for his eyes to see his surroundings for the first time. Afterwards, people attempted to steal, kill, and destroy the man and his testimony of his miracle of light coming to his eyes and the person who gave him such a miracle.

The enemy will attempt to steal the miracle of the Light of Christ within you, too. Will you allow such a thing?

While the Pharisees and other community leaders squabbled about how Jesus brought sight to the blind man, Jesus guided others like a Shepherd with His Light and Life to the Father. It was winter during the Feast of Lights when Jesus announced, “I am the Light of the world. I will guide you safely to the Father.”

Hanukkah, meaning, dedication, is the Jewish Festival of Lights and commemorates the rededication of the second Jewish Temple in Israel. Since, Christianity dates back to the Jews, let’s glance at this Jewish Festival to see how it correlates with our Christian heritage.

The Jews stayed close to and centered their lives around The Temple: There were things the Jews cherished and held in great honor. The main ones are the following:

God used His chosen people to care for these main parts for living, while carrying out His redemptive plan. The Temple priests and scribes were responsible for the following:

The common people’s roles stemmed from agriculture. The people brought sacrifices during the Festivals to the priests at the Temple. The sacrifices were offered to God from their crops harvested during the year. The Feast of the Lord correlated with the Spring, Summer, and Fall harvests. And, the Festivals were linked to worshiping God in the Temple.

In order to know what’s happening in Israel, just take a look at the Temple: So, on this journey, let’s glimpse at what happened to the Temple and why worship had ceased.

By 200 B.C. (Before Christ) Israel had neglected God and their earthly enemies for so long, they were now following after and had bowed to Greek gods, culture and lifestyle.

The Temple of the Lord was Desecrated

Greek robbers and thieves seized the Temple of the Lord to steal, kill, and destroy everything about the Temple and the God who dwelt, spoke, and was known in this place. In 204 BC, King Antiochus IV Epiphanes, meaning God manifest, desecrated the Temple of Jerusalem. He enforced new names, traditions, rules, and laws, which attempted to destroy anything concerning the Lord in the following ways:

We may say or think, “Oh, how terrible” But, let’s see how the Temple was restored and how this incident relates to us today.

The Temple Recaptured and Restored to God and His People

War ensued among the Jews and Greeks. In 165 B.C. Mattathais, an elderly villager from a priestly family, set his mind and stood against his enemies who had stolen the Temple and Jewish life. Mattathais killed King Antiochus IV Epiphanes, who had desecrated the Temple of the Lord.

He and his five sons recaptured the Temple in the name of the Lord. Mattathais named his son, Maccabeus the priest. Their Temple and worship, government and Law were restored to Israel. Now, the Name of God and His Feasts would be restored to His Temple and His people.

Under the Maccabeans, the Festival of Lights (Feast of Dedication or Hanukkah) was instituted at the end of the Feast of Tabernacles. God’s people danced with joyful singing, praising, and playing instruments in homes, court yards, and the center of their cities. Jerusalem lit the streets and homes with celebrations of the Light continuing for eight days.

A menorah with lit candles is placed in a front window of each house and lights at doorways, so people passing can see and remember the story of Hanukkah. Gifts are exchanged each night. Games and rich foods fried in oil, potato cakes and apple filled doughnuts, are traditions during this festive time.

The early Church chose December 25th as the day of celebration. This is the day they took over the birthday of the Greek god, Zeus and the Roman god, Jupiter. December 25 is the day we celebrate Jesus’ birth as the Light of the world.

During the Festival of Lights, Jesus warned those who would listen about an enemy. He said, “The thief comes only to steal and kill and destroy. I came that they may have life and have it abundantly.” (—John 10:10 ESV) [2]

In John 8:42-47, Jesus revealed this enemy, the devil and his cohorts as thieves (robbers) who would attempt destruction on anything related to the Lord, if given the opportunity.

John 10:1-10: the thief (Greek, kleptes) is defined in the Bible Dictionary as, a robber who plunders your life openly and violently. Such kleptes, Robbers attempt stealing from you, killing your ways of walking with Jesus, and destroying everything he can to pull you into living for the world, the flesh, and the devil.

They recognized the enemy had stolen the Temple and destroyed their lives with God for about forty years. The Light of the world had come to trample their enemy and give them abundant life. They now had the opportunity to live greater than ever! Would they take it?

What about you? Are you ready to live greater than ever spiritually?

I found myself plundered by kleptes, Robbers, recently. I had allowed my prayer life and time with Jesus to almost halt. My body was fighting with bronchitis and my emotions were frail. The enemy had attempted to destroy the life I had dearly cherished as he sent waves of unrest. The Light in this temple of the Holy Spirit had grown dim. Could I recapture the temple of the Holy Spirit? Could I relight the Light of Christ, who had radiantly glowed with His Presence in my life?

Do you not know that your body is a temple of the Holy Spirit within you, whom you have from God? You are not your own, for you were bought with a price. So glorify God in your body.” (—1 Corinthians 6:19-20) [3]

Maybe unintentionally, thoughts started plundering your daily prayer and time with the Lord. Perhaps, thoughts violently stole your emotional well-being and strength. Or, the deceitful tactics of the enemy killed your peace during this stormy year of repeated waves of unrest.

I discovered four ways for Jesus to give me life and help me live greater than ever. And I want to share those with you. Let’s look at the ways we may celebrate the Light of the World, Jesus, has come to me! And, He can shine through me! 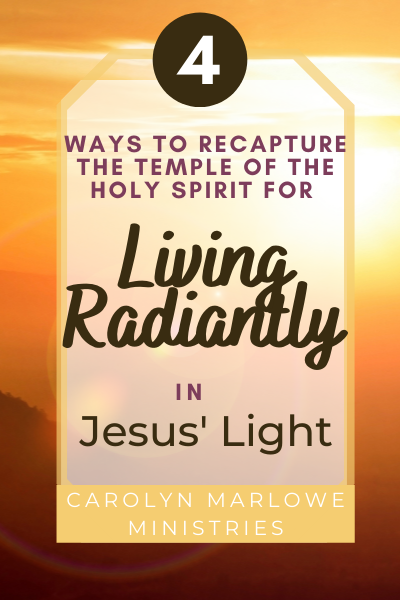 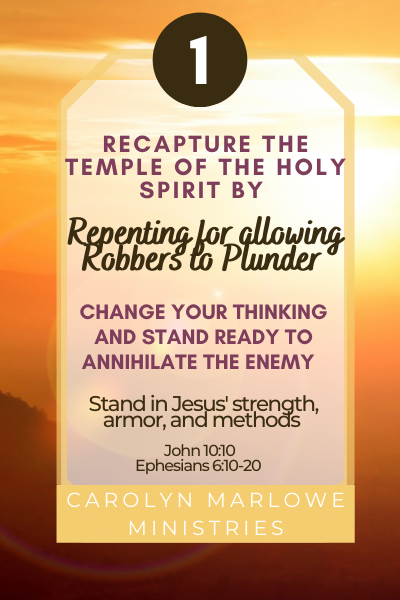 Recapture the Temple of Holy Spirit by Repenting for Allowing the Enemy to Plunder:

Recapture the Temple of the Holy Spirit today! 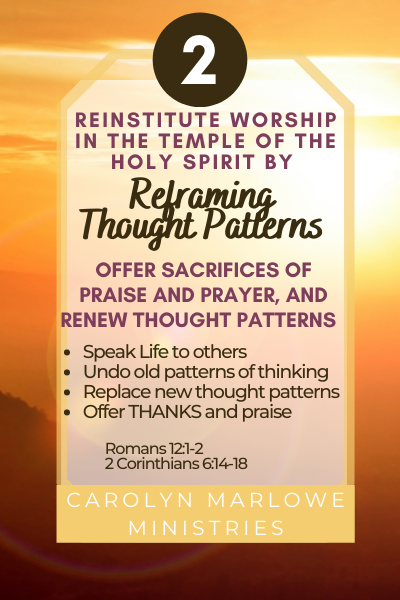 Reinstitute Worship in the Temple of the Holy Spirit today! 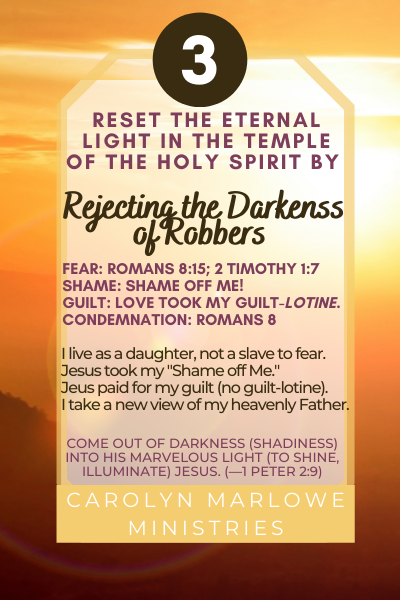 Reset the Eternal Light in the Temple of the Holy Spirit by Rejecting the Darkness of Robbers‘ Plunders:

Darkness and light don’t mix: Come out of darkness (shadiness) into His marvelous light (to shine, illuminate) Jesus. (—1 Peter 2:9)

Do you like to take selfies or photos of any kind? You and I are photos of whatever is shining within. What does your photo reveal?

Reset the Eternal Light in the Temple of the Holy Spirit today!

Robbers Fear, Shame, Guilt, and Condemnation must be exposed.

Stand against Robber Shame who constantly reminds you with shame on you!

Stand against Robber Guilt who attempts to kill you with a guilt-lotine.

Reset the Eternal Light of Christ’s presence in the Temple of the Holy Spirit today! 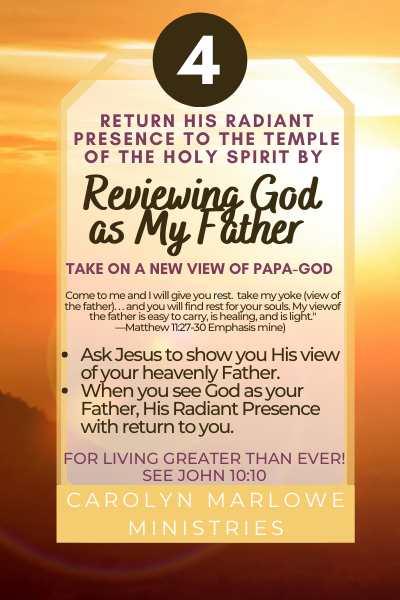 Return the Radiance of Jesus to the Temple of the Holy Spirit by Reviewing God as my Father to find rest in my soul:

Return the radiance of Jesus Christ to His temple today!

What about you, my friend—are you one of His people? Have you been captured, plundered, and squandered by spiritual thieves and robbers?

Remember the ways to recapture the Temple of the Holy Spirit, who you are:

The following are practical ways to celebrate Jesus and honor the Light of the World who has come to bring life and light to you and me:

Celebrate The Light of the World Festival with others for these five days!